Danny worked late tonight, but that doesn't mean we can't have a nice dinner. I actually made Easy Mac for the kids and had the dinner ready for when Danny came home. This recipe is the best lasagna I have ever had, at home or anywhere else. It is baked with a cream sauce and only served with marinara on the side. I might have had enough lasagna noodles, but I wanted to use up my box of manicotti so I modified the recipe a little. I filled the manicotti and topped it with only 2 cups of mozzerella and, instead of adding 1 1/2 c. of the cream sauce to the ricotta mixture, I added 1/c c. and used the rest to spread (or glop) on top. I have never used romano or fontina and it has made no difference to me. As a side, I made challah garlic toasts - a favorite in this house - challah from this week, Smart Balance, dried parsley, minced garlic, and parmesan cheese. I stuck them in the oven right before the manicotti was done. And, who doesn't need a little peach/apple crisp to end the night? 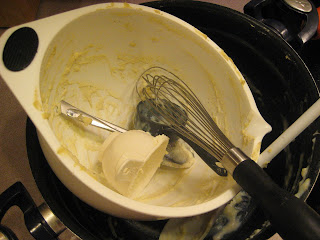 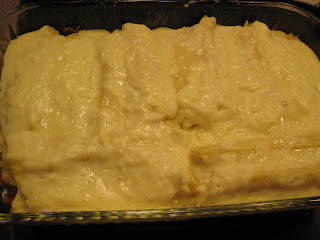 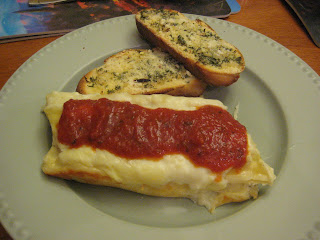 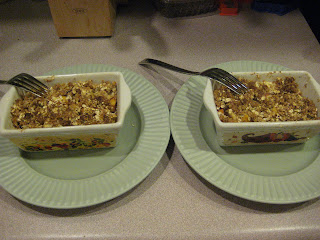