I made waffles for lunch today and since my toughest critic wasn't home, I decided to substitute Smart Balance for the oil. I melted 6 tbsp of Smart Balance Light (big difference in fat count) for the 7 tbsp of oil and I was satisfied. The only difference was that the waffles did not stay as crispy for as long. The kids each had a whole waffle and I had my usual three...or was it four?? Anyway, I felt much better eating them knowing that I only used 30 grams of added fat (besides the eggs) instead of 90 or so. I put four sets of waffles in the freezer and have a feeling that when they are reheated in the toaster, they will be just as crispy and yummy as the original. I might just have to test out that theory tomorrow...or, maybe later tonight ;) 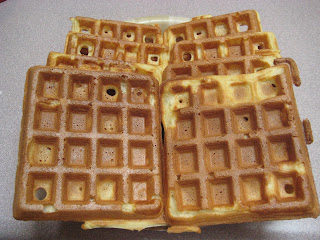