Last night, I had promised the kids that they could stay up "late" and watch Dancing with the Stars with us. Danny ended up coming home later than usual so I fed the kids early and made dinner for the two of us later, to eat while watching. For the kids, I made Stove Top Mac-N-Cheese and was going to have that as a side dish for our pan fried tilapia. The kids didn't really love the macaroni, especially Amelia and noone ate much of anything. When we sat down to watch Dancing with the Stars and mine and Danny's plates were revealed, both Amelia and Leo were suddenly starving. In the end, I think I managed a crumb or two from my tilapia...and Danny shared his mac-n-cheese. Of course, I could have just had challah garlic bread and have been satisfied. Next time, I will skip the mac-n-cheese and we will all have a simple fish dinner. And, no, I can't believe that those words just came out of my mouth! 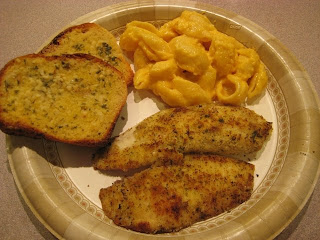