I have always wondered what it feels like to stop at the butcher "to pick something up for dinner", rather than always grabbing from the freezer and planning ahead. Tonight was the night and Lamb Breast was what caught my eye. Ok, the price tag and bright "Managers Special" sticker was what really did it. It was after 5pm and I was not close to home, but I still wanted to see if someone at Hungarian could give me some pointers on cooking the darn thing. One deli guy told me that he is a chef, but has never cooked lamb and the other one looked at me sideways and said the only thing I could really do was broil it. When I got home and saw just how much fat there was, I decided to dig for whatever meat I could find and do some sort of stir fry. When all was said and done, I got a little more than 10 oz of meat and a lovely bunch of soup bones. I marinated it in peanut oil, sesame oil, soy sauce, rice wine vinegar, a pinch of ground ginger and maybe six red pepper flakes. After the meat sat for a while in the fridge, I put a little peanut oil in the pan with some garlic and browned the meat. I took it out and added red and yellow pepper (for Danny) and corn (for me). Had I planned better, I would have bought baby corn and broccoli (both for Danny)...that's next time. There was only one serving for each of us, but the results were really good and sometimes it is nice not to have the tempation for seconds...or thirds. Not bad for $3.38 :) 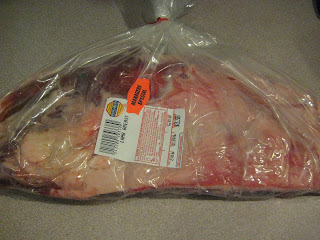 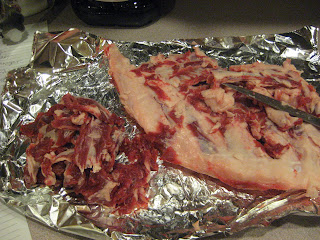 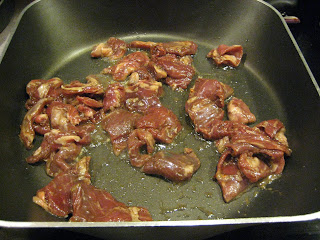 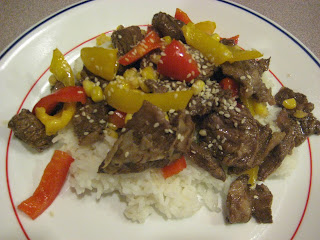