Before Danny and I were married, he ate out ALOT and Montreal has some really good eats. One of Danny's favorite appetizers when eating Chinese food out was peanut butter dumplings. Apparently, alot of Montrealians enjoy them because there is a recipe in Noreen Giletz's Meal-Lean-I-Yumm cookbook for them. I usually make a simple chinese dumpling, filled with everything from ground turkey to tofu and seasoned up with soy sauce, scallions, ginger and whatever else I have around. What makes this dish over the top (I think I have been watching too much Food Network) is the peanut sauce which comes straight from the cookbook and will be posted later. For the dumplings, I used some mashed sweet potatoes I had in the fridge (1 1/2 c.), 1 lb of ground turkey, some fresh ginger, dried chives, shredded carrot and thats all. They were really good, except I found the filling a bit mushy and I would have liked the meat to be a bit firmer. I have left over filling and wrappers and I am going to make them for a Shabbat dinner side dish. Before filling the wrappers, I am going to sautee some onions and garlic and then brown the filling a little before using it. I think it will come out a bit firmer and will contrast nicely with the soft won ton wrappers.

Some additional info: After I saw the post, I realize that some people have never made dumplings before. There are a couple of ways to cook them, the leanest of which is to boil them, 3-4 minutes and then are done. Dont pile them on top of each other (like I did). Lay them out in a single layer once they are cooked until you are ready to heat them with the sauce. In a large skillet, layer the dumplings with the sauce and then they wont stick when you are ready to serve them. 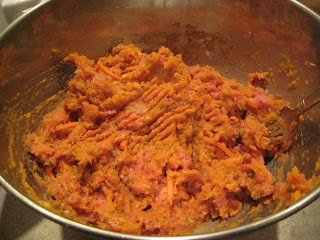 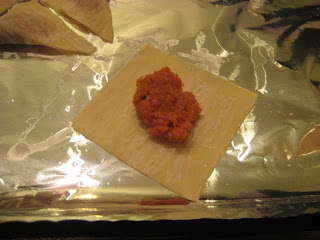 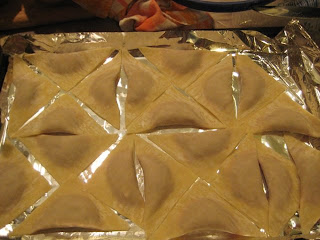 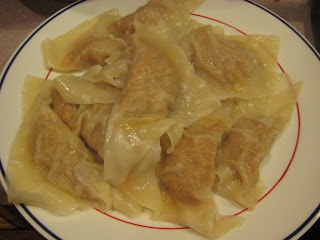 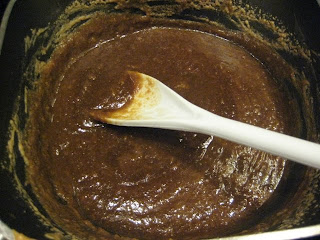 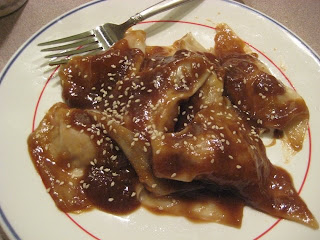