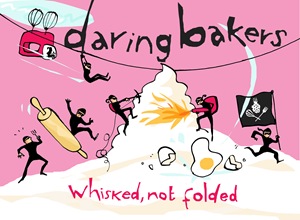 The December 2009 Daring Bakers’ challenge was brought to you by Anna of Very Small Anna and Y of Lemonpi. They chose to challenge Daring Bakers’ everywhere to bake and assemble a gingerbread house from scratch. They chose recipes from Good Housekeeping and from The Great Scandinavian Baking Book as the challenge recipes.
-----
I decided to use the Scandinavian recipe because I had the ingredients on hand.  It was mentioned in the forums that the dough was a little dry.  Talk about putting it lightly,  this was the dough from hell.  I doubled the recipe so I could make a house for both of the big kids, but it took me so long to roll out the pieces for one, I couldn’t even think of making anymore.  I had to knead in small amounts of water until it would let me roll it, it was horrible.  I have tons of dough in the fridge, I am going to try to make some *drop* cookies tomorrow…

1. In a large bowl, cream the butter and sugar until blended. Add the cinnamon, ginger and cloves. Mix the baking soda with the boiling water and add to the dough along with the flour. Mix to make a stiff dough. If necessary add more water, a tablespoon at a time. Chill 2 hours or overnight.

3. Roll the dough out on a large, ungreased baking sheet and place the patterns on the dough. Mark off the various pieces with a knife, but leave the pieces in place.

4. [I rolled out the dough on a floured bench, roughly 1/8 inch thick (which allows for fact that the dough puffs a little when baked), cut required shapes and transferred these to the baking sheet. Any scraps I saved and rerolled at the end.]

5. Preheat the oven to 375'F (190'C). Bake for 12 to 15 minutes until the cookie dough feels firm. After baking, again place the pattern on top of the gingerbread and trim the shapes, cutting the edges with a straight-edged knife. Leave to cool on the baking sheet. 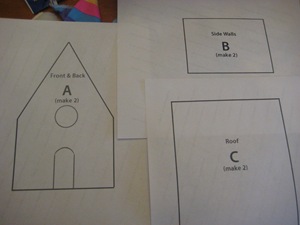 Here is my test run with construction paper… 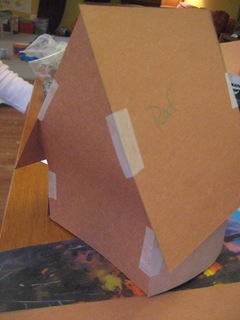 Cutting out my final piece…(agh!!) 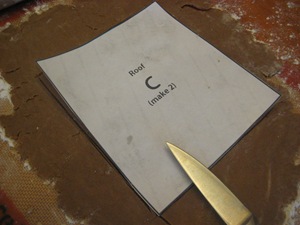 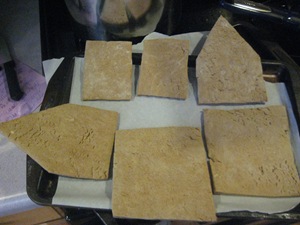 This was my first attempt to glue everything together.  I made the this recipe for Royal Icing, but omitted the extract: http://www.joyofbaking.com/RoyalIcing.html 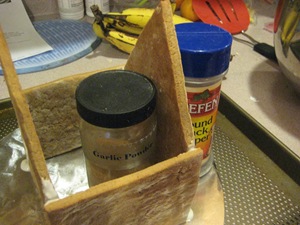 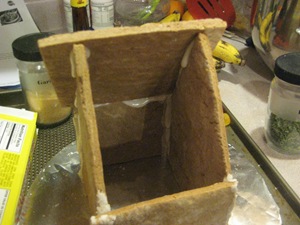 When it was time to attach the roof pieces, I realized just how uneven my pieces were.  I ripped it apart, trimmed everything to fit and it worked much better.  Amelia had been waiting days to help me decorate! It was fun to work with her at the beginning and finish it off on my own. 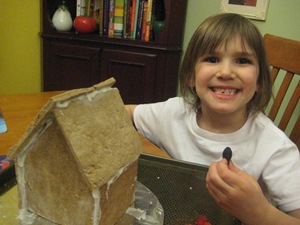 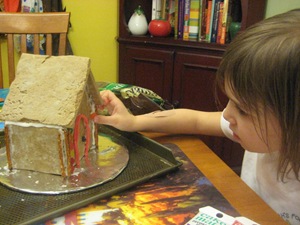 The final product ;) I think it’s pretty cute for my first attempt.  I didn’t buy much candy, just colored twizzlers, Dots and Juju bees (or something like that).  I used chocolate, white, and cherry chips for the roof which is my favorite part of the house.  The best was seeing the kids come in at the end.  Obviously, they haven’t seen that many gingerbread houses, but they still think their mom’s is the best.  We used it as our centerpiece for dinner the next night for our Chinese Dinner Party and it was really cool. 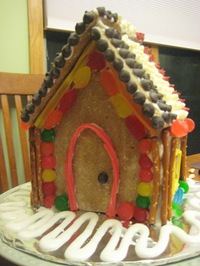 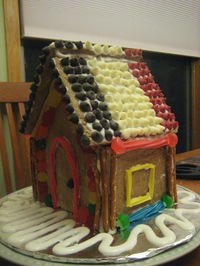 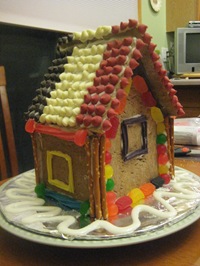 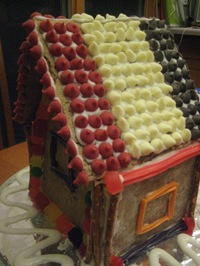 I did end up making cookies from the gingerbread and they have become a family favorite.  The dough was so hard, I decided to just slice it with one of my major chef knifes and it worked perfectly.  The kids decorated them with the leftover royal icing.  I didn’t have cloves so I omitted them and I am glad I did, the cookies have just the right spice with the cinnamon and ginger.  Yum :) 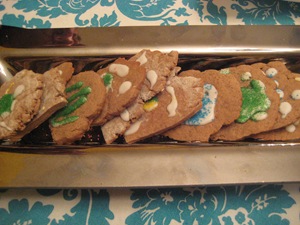