Every year since becoming a mom, I have wanted to make fabulous birthday cakes for my kids.  Almost six years and three kids later, I made my first one this past week for my sons 4th birthday party.  I am so thrilled that it came out amazing and can’t wait to make a cake for my daughter’s 6th birthday in February.  I was very nervous to take this on so I did a lot of research and enlisted the help of an old friend via FaceBook (see, it’s good for something!) and it worked out pretty well – thanks, Esther!!  I know that there will be no excuses for cupcakes with some sprinkles from now on and I am totally OK with that! :)

---
Lots of butter cream frosting…it’s the recipe from Wilton.  I made three times the original recipe and had some left over, but not sure if I would have been OK with it just doubled… 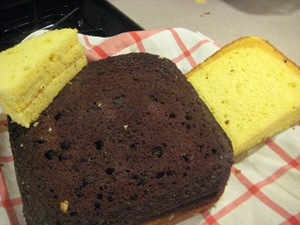 I used Duncan Hines cakes and when I baked them on Thursday night, I thought they looked a little thin.  I started with a square and a circle each of yellow and chocolate and ended up baking a 9x13 of chocolate and another square of yellow the next day.  In the end, I used the three squares, one for the smaller mountains.  The circles and 9x13 are in the freezer for an emergency cake situation…

It wasn’t the most level cake, but it worked for me! 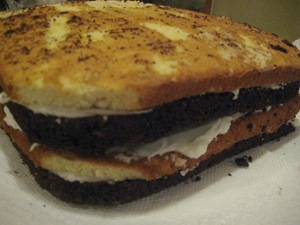 This was a mix of a couple of Wilton Dyes, I thought Copper would work and it didn’t, so I added Brown…. 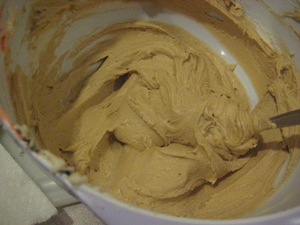 Crumb coats are supposed to make the “real” frosting easier, but they are so freakin’ hard, especially on the pieces that have cut sides.  Grrr.  I was so happy to be done with them and get them in the fridge to harden a bit. 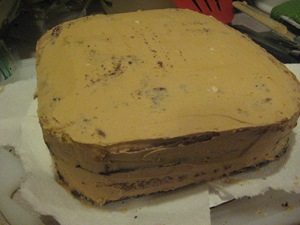 Frosted and lovely :) I had bought circle cake boards, so I cut a little out of one so it fit snuggly next to the other. 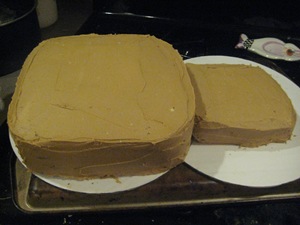 I ended up using some cake scraps to shimmy the small mountain from the back, it was a little tipsy at first. 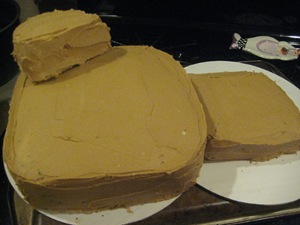 The cake design I was working from used butter cream for their waterfall, but Esther suggested I used piping gel.  Piping gel?? I had never heard of it, but it is inexpensive and gives a pretty cool effect.  I tinted it with the Wilton dyes.  I read somewhere that it takes alot of gel to make your design.  I used two containers, but probably only needed one.  The thing is, you never want to be short when you are dying something. 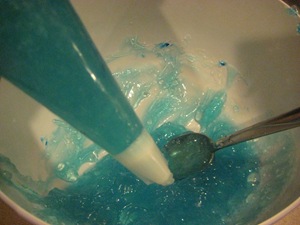 I did have to reapply some gel on the top part of the mountain because it slid down to the second tier, but it was ok.  I would put less on to start and build it up next time.  This step was so scary, but I just decided to go for it and see what happened.  Fingers crossed and it came out awesome! 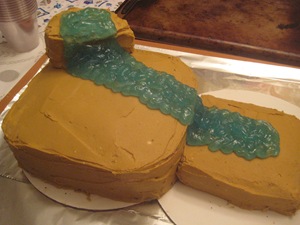 I used the Wilton grass tip and green butter cream all around the cake.  Wilton.com is right, if you stop the pressure on the bag *before* lifting up, your grass will stand up straight.  It’s just not always possible when doing the sides of the mountain.  I bought jungle animals from Joann and they were the perfect size.  Next time, I will cover the cake board…:) 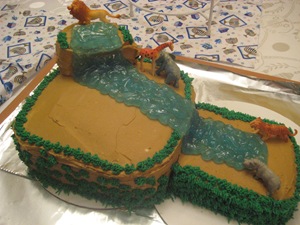 The final product…and it tasted pretty good, too! ;) 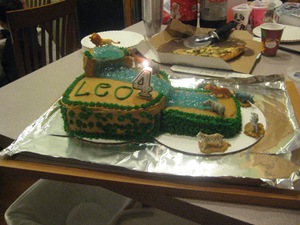